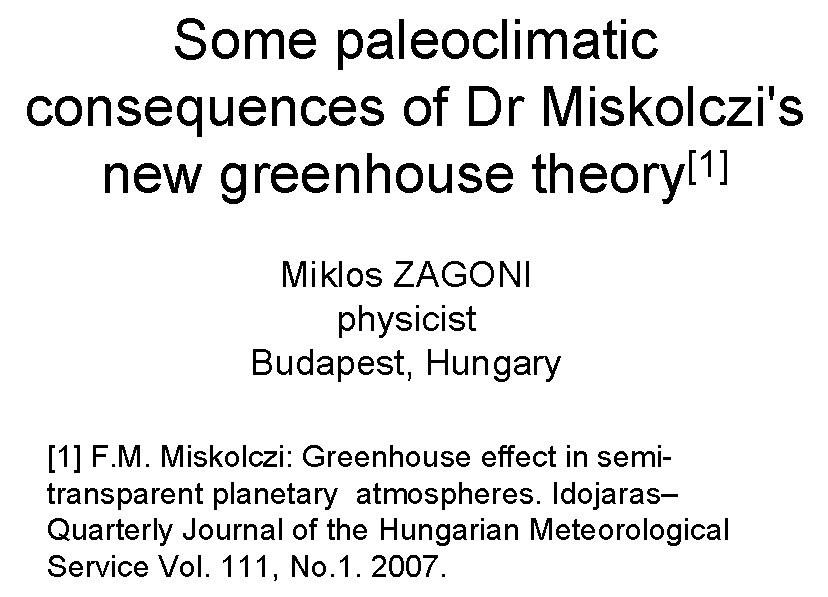 It is an honor to speak here in the same section with Professor Lehr, science director of The Heartland Institute. So far we have heard a lot of arguments, opinions, counter-examples, ideas about global warming. But now, by Dr. Miskolczi, we have a complete theory, a detailed analysis of the fundamental physics of atmospheric radiation transfer processes. As far as I know, this is the more complex physical account of the planetary greenhouse effect. Having this deeper insight, we are now able to draw the limits, and determine the conditions of possible man-made global warming. My aim here is to support his results by pointing out some paleoclimatic consequences, showing that it may resolve certain problems of glacial temperature reconstructions. — But first of all, I must recall the logic of his theory.

He has two basic recognitions which are as follows.

First, from his high resolution atmospheric transfer code (HARTCODE) he realized that there are certain new correlations between some radiative flux components in the atmosphere. Second, he recognized that the widely used classic solution for surface temperature calculations is mathematically incorrect, and physically problematical. These two results together started him on a way which led to new equations on radiative transfer. Their consequences may profoundly modify our overall concept of greenhouse effect. 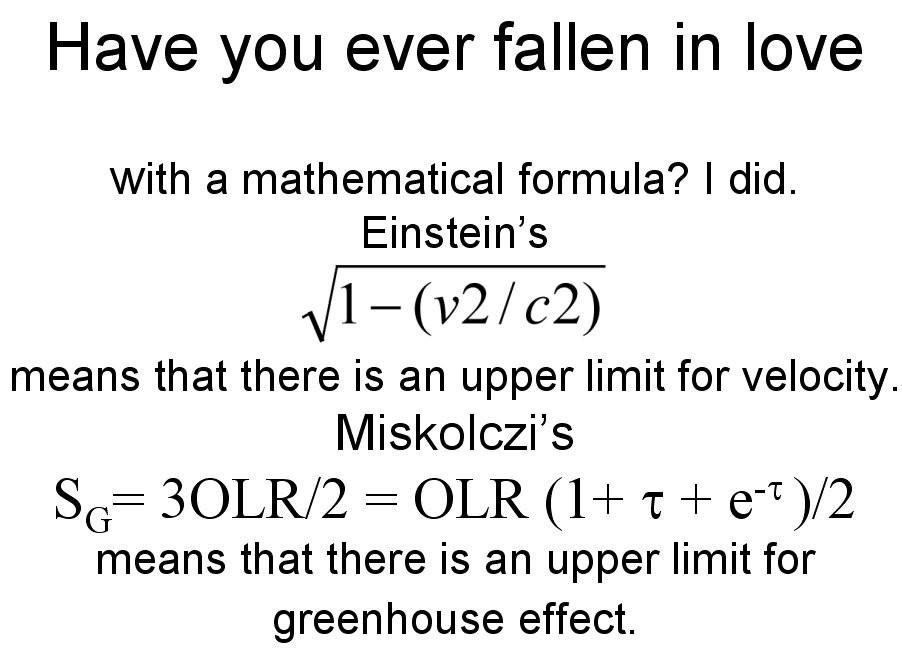 Have you ever fallen in love with a mathematical expression? I did. Einstein’s famous formula means there is an upper limit for all possible velocity; if a body tries to reach it, it needs more and more energy for acceleration. According to the new greenhouse equations, there is an upper limit for greenhouse temperature. If an atmosphere tries to reach it, it confronts energy limits.

(There was a time when The New York Times used to bring Einstein’s newest formulas on its front page. So, gentlemen from NYT please, here is your new front page story: ‘The Formula That Stopped Global Warming!’ )

The basic understanding is that in Earth-type atmospheres (where there is a practically infinite possible source of optical depth in the ocean surface) the temperature of the ground, defined here by the surface upward longwave radiation, SG, is limited by the available incoming shortwave solar flux (F0), which, in global radiative equilibrium, is equal to the outgoing longwave radiation (OLR). This equation equals to Miskolczi’s new greenhouse function, defining (and exactly reproducing) the real, measured tau=1.86 optical depth of the Earth’s atmosphere.

Let’s see how this–I might say revolutionary–equality was derived. 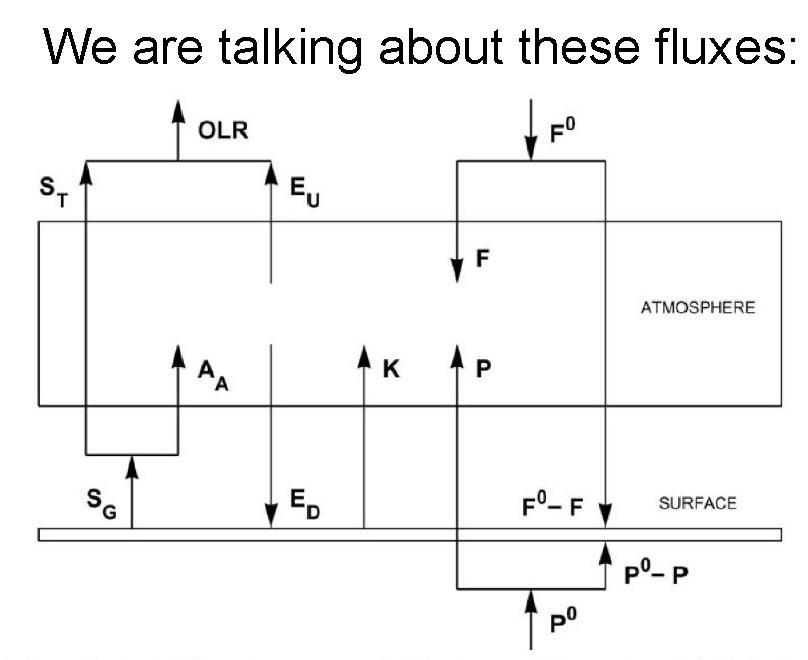 This picture does not need too much explanation. As Dr. Miskolczi has already showed, this is the radiation model of the global mean incoming and outgoing, upward and downward, shortwave and longwave, clear sky flux density components. P0 is the sum of geothermic energy, human energy production and the like, in the case of Earth it can be omitted (it is about 0.03 percent of F0). 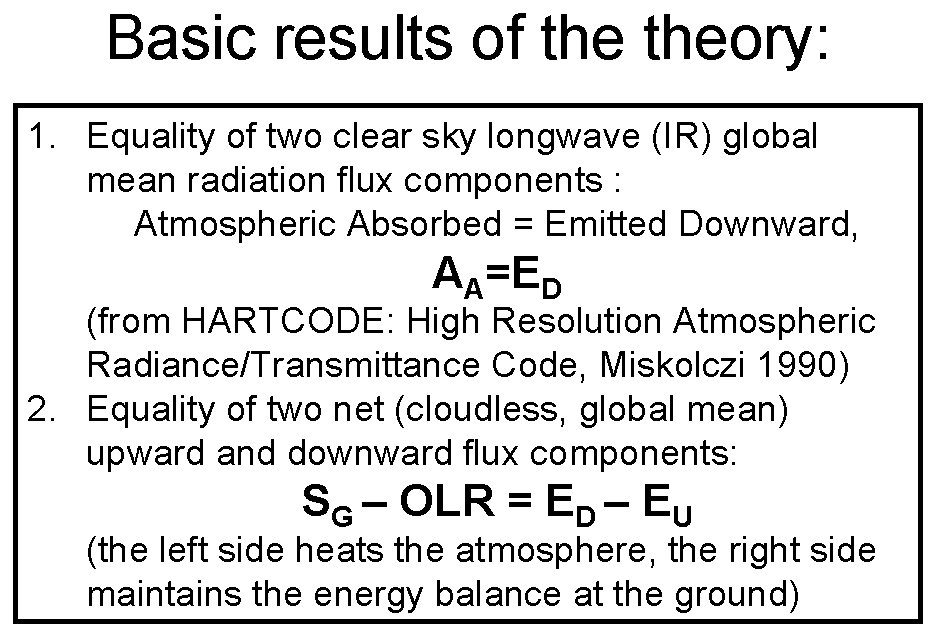 His first observation was (according to his HARTCODE) that two infrared flux components in the atmosphere are not only similar in magnitude—as it usually can be seen in the common flux distribution estimates, but are exactly equal, or, I might say, identical. They are: the surface upward LW radiation absorbed by the atmosphere, AA, and the atmospheric radiation emitted downward, ED. So AA=ED. You could realize from his presentation, or from his article, how precisely this identity works. He was able to prove theoretically that this is a consequence of the Kirchhoff’s law, stating the equality of absorptivity and emissivity, aλ=ελ .

From this result it directly follows by simple arithmetic (I refer here to the flux chart again) that two other net flux components must also be equal. They are: the net upgoing LW flux (SG – OLR), and the net downward atmospheric LW radiation (ED – EU). Here SG – OLR is the net longwave heating of the atmosphere from the ground, and ED – EU is the net heating of the ground from the atmosphere. On the long term and global mean, it is understandable that they are equal; or, more precisely, they must be equal in the case of thermal equilibrium at the ground. (This is not an easy point at all, and an important result of Dr. Miskolczi, opposing the old theory). 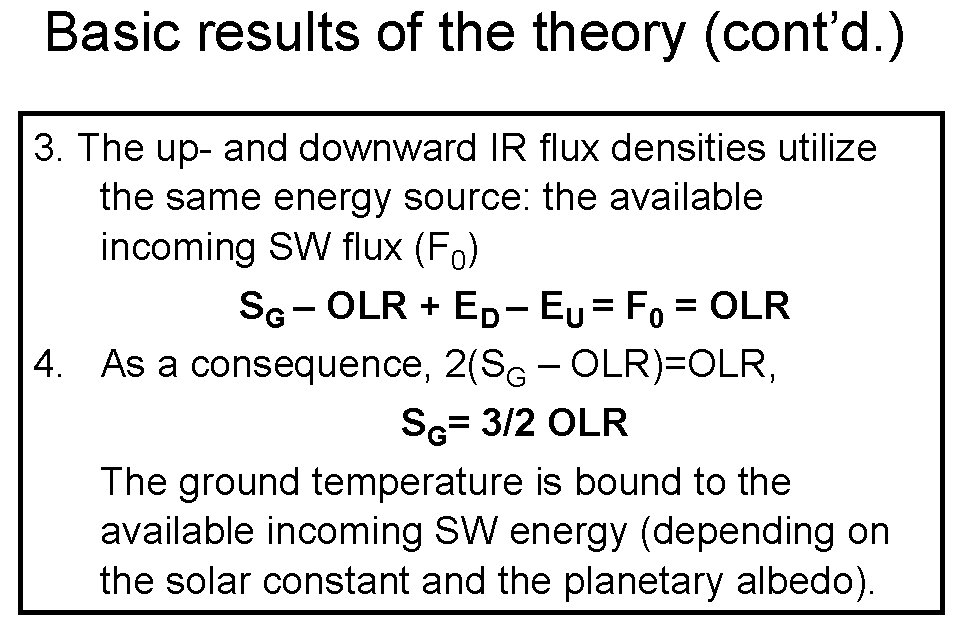 It is one small step for a man, a giant leap for mankind: there is a strict relation between the surface emitted thermal flux and the incoming solar radiation. Surface greenhouse temperature is tied to the available incoming energy, and cannot be changed by adding more greenhouse gas; it can be changed only through the energy input of the system (solar constant and/or planetary albedo).

So, according to the new equations, any change in the greenhouse gas concentrations in the air would lead to energy imbalance. The system must find its equilibrium again. How can it do that?

Either it shifts from the radiative equlibirium between the Earth-atmos- phere system and the surrounding space—this cannot be maintained too long, or it must remove infrared absorbents from the air. On a long turn, the latter is its manageable way. 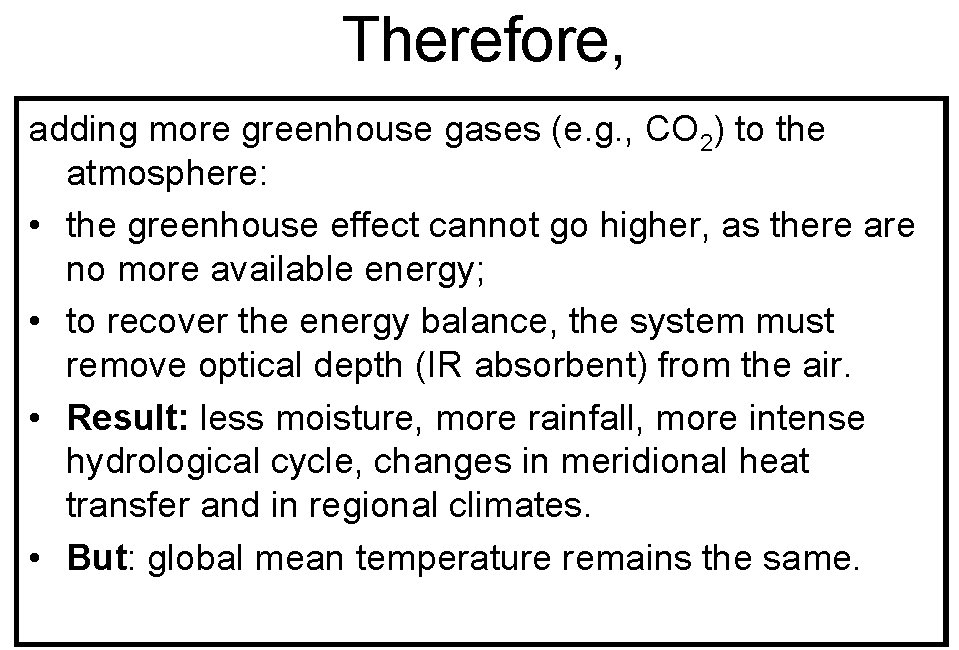 Therefore, according to its balanced manner, the system must remove LW absorbents from the air, for sake of energy conservation requirements. CO2 increase in the air indicates water vapor decrease. More rainfall, for example.

This might have serious consequences. More rainfall: more intense hydrological cycle. Less water vapor in the atmosphere: changes in the precipitation patterns. Less vapor: 0—the equatorial extra heat would be transported by less moisture to the colder polar regions. This all could lead to possible regional climate modifications. Changes in the global mean cloud cover and cloud altitudes can happen. Alterations in the general atmospheric circulation? — Yes, perhaps.

But: the global mean temperature remains the same (or, more precisely, fluctuates around its equilibrium value) — as far as the radiation equilibrium is maintained and no change happens in the incoming solar flux or in the planetary albedo.

I do not want to go into further details of this elegant and sophisticated theory; I am sure we will do it elsewhere. I just turn at some immediate consequences. 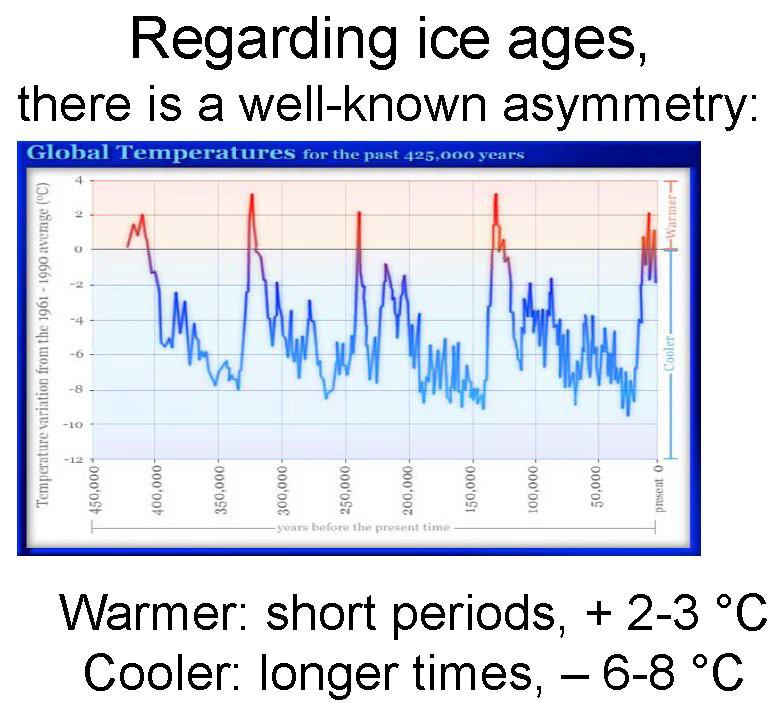 Well, regarding ice ages, there is a well-known asymmetry in the glacial temperatures. Warmer-than present periods were short, and only with little temperature values; cooler periods were long and really cool.

The nowadays predicted global warming is said to be exceeding those high peeks by three or four degrees. The cause would be the increased amount of greenhouse gases in the air.

The next picture is usually used to support that opinion, showing connections between temperature and CO2-content in the glacial times. 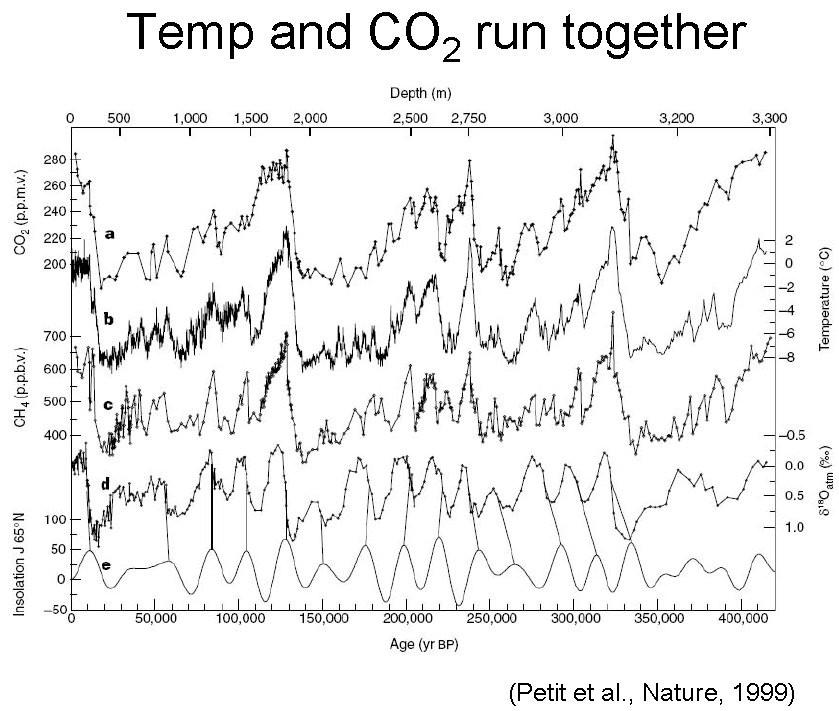 It is a strong connection, but in which direction? It is said that in the past surely the incoming energy, i.e., temperature was the leader, but in today and future warming the carbon dioxide should take over the control.

Positive moisture- and CO2-temperature feedbacks were assumed to enhance the initial effect.

According to the old theory, the change in the temperature was initialized by small orbital changes (Milankovich theory); then joint positive water vapor and CO2 feedbacks happened, which led to more and more warming.

But: if that is the case, there arise a problem: what stopped temperature at about 3 degrees over the present level? Why did not it run further? Runaway greenhouse effect never happened.

The typical vegetation-feedback theory does not solve the problem (it acts in the opposite direction). 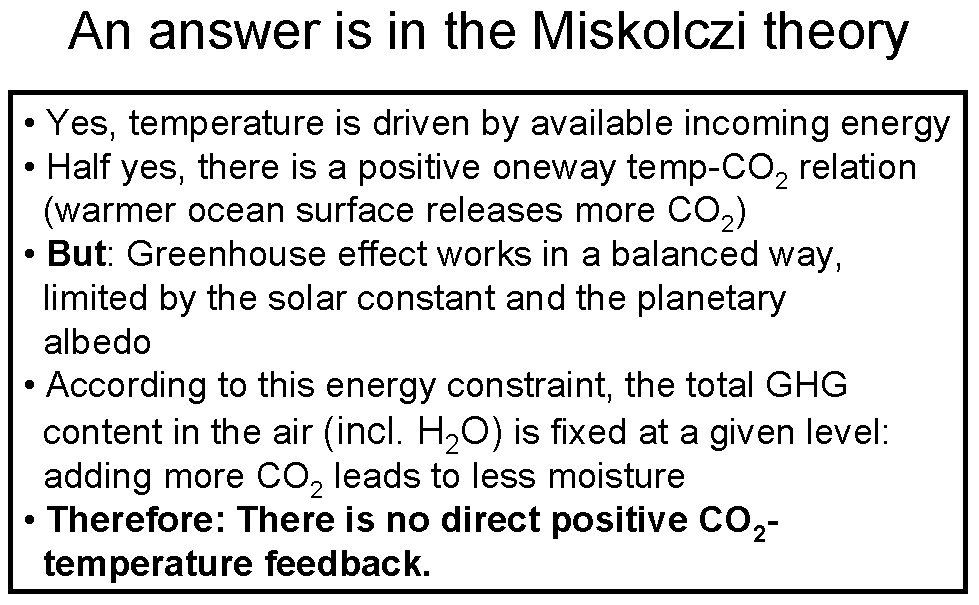 The answer is in the Miskolczi theory.

Partly yes, there is a one-way correlation between temperature and atmospheric CO2-content: warmer ocean surface releases more CO2 into the air — hence the parallel run.

But, as the greenhouse effect of the Earth’s atmosphere works on a saturated way, it must maintain its balance between the available energy and the ground temperature. More greenhouse gas in the air (by human emissions, for example) leads to necessary removal of other greenhouse gas (water vapor, for example) from the system. 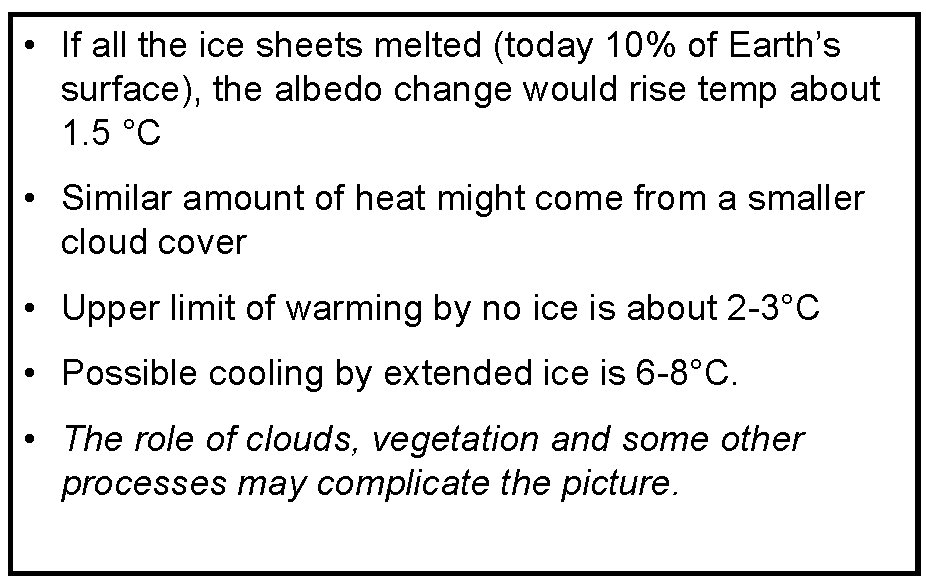 But then, what happened? Let us assume that all, or most of all ice had melted according to some initial warming. The Earth’s surface albedo then decreased to about 2 percents. The temperature rise according to this albedo change is about 1.5 degrees Celsius.

It is hard to estimate the effect of clouds, but, assuming that more CO2 in the air really led to less water vapor, a drier atmosphere might have smaller cloud cover. Calculating its limits and effects, another 1.5 °C might come. Therefore, the overall warming might have had a limit at about 3 degrees.

Lets talk about the present and the future. As the changes in the atmospheric greenhouse gas concentration (including industrial emissions) cannot lead to direct warming, the overall possible heat rise must come from the albedo shrink. If all the available ice sheet vanishes, the limit of the possible further global warming is about 2 or 3 degrees. The sometimes predicted 4-6, or even 3-4 degrees seems to be impossible. 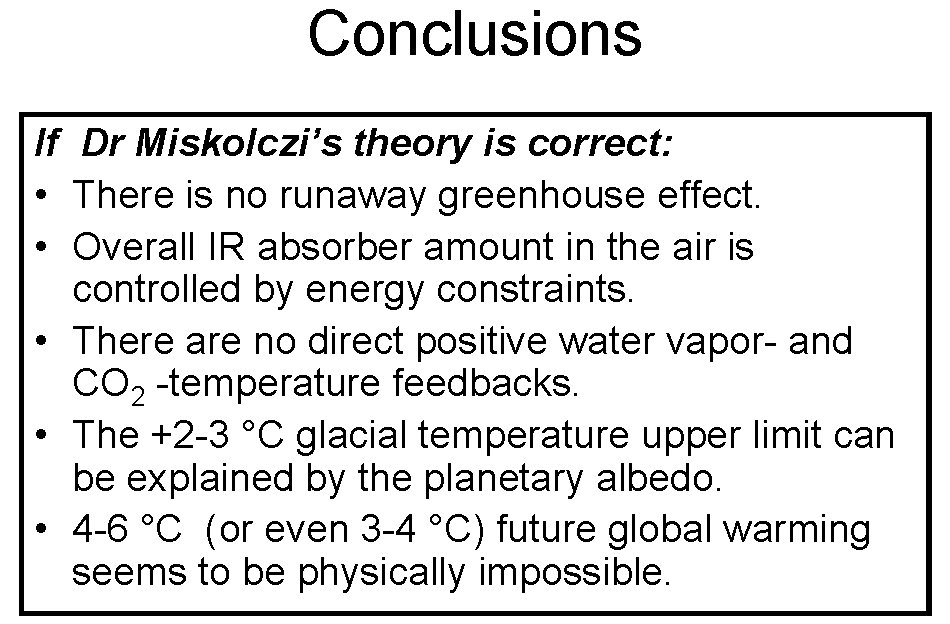 To sum up: as far as Dr. Miskolczi’s theory (or my understanding of it) is correct, there is no runaway greenhouse effect; there are no positive water vapor-temperature and CO2-temperature feedback loops; the total infrared absorber amount of the air has a limit according to energy constraints; the Earth-atmosphere system maintains a controlled and saturated greenhouse effect through the practically infinite source of greenhouse gases (water vapor) in the ocean surface; the historical temperature limit can be explai- ned by the lack of ice; and there is no room for a further vast warming.

What could complicate this picture is human modification of the total surface albedo through land use change, industrialization, deforestation and urbanization. Human impacts on the Earth, both surface and atmosphere, together might initiate a disturbance in the energy equilib- rium. As a reaction, the system will try to recover itself from the imbalance, and it is hard to estimate the outcome of the process for a longer run; so necessary and preliminary providence will not hurt. But steady and robust global warming simply from emissions cannot happen.