A matter that has received less attention than it should is what are the energy consumption and cost implications of the measures proposed to abate carbon dioxide and what would be the economic consequences of success in this.

There are many emission abatement goals that have been floated. Perhaps the two most conservative are an emission stabilisation goal and a 20 per cent reduction goal. In Australia and England the respective Garnaut and Stern reports have envisaged much deeper cuts than these.

The first chart show business-as-usual – with emissions in 2030 projected forward at the 1990-2004 rates of 1.3 per cent for the OECD and 5.7 per cent for the developing countries; the former Soviet bloc is held constant. This shows emissions at an aggregate 43 billion tonnes, almost 50 per cent higher than 2004. 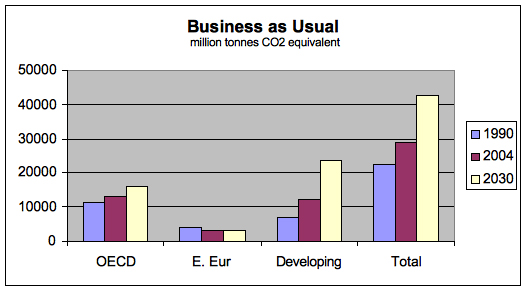 If now we were to call for a 20 per cent reduction on 2004 levels and apportion that equally in per capita terms, the outcome is a standard 2.5 tonnes per capita. For the OECD countries this is a dramatic reduction. The OECD’s aggregate 16 billion tonnes under BaU (12 tonnes per capita) becomes 3.3 billion tonnes. Developing countries, though above their 2004 levels are well below their BAU on a per capita basis, as are the former soviet bloc countries. Chart 2 illustrates this. 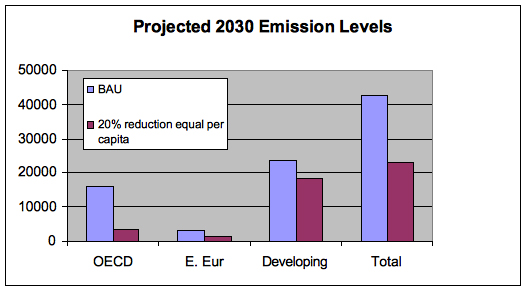 The most recent Australian report on the emission control measures, by Professor Garnaut, acknowledges that the easy gains in emission reductions have been made, especially with the dismantling of the command economies of the Soviet bloc and China. Those countries’ CO2 intensities have now stopped falling, in fact are rising. Indeed, China has already surpassed the magic 4 tonnes per capita which would be the level required for stabilisation of emissions and has only pulled a fifth of its population out of poverty.

Mr Garnaut suggests that Indonesia and PNG could become vast sinks to offset other countries’ emission levels. This is a pipe dream. It may allow for a windfall gain for the two economies but there are not enough trees for this to offer anything but a pinprick.

Ominously, Garnaut hints strongly about the necessity of trade pressures on developing countries to reinforce their sense of public spirit. That in itself would destroy the world trading regime and retard all countries’ living standards. And, the process is already underway with the EU negotiations of bilateral “Free Trade Agreements” with developing countries. As Rasheed Sally points1 out, “The EU is also increasingly interested in linking trade policy to climate change. New FTAs will

likely contain trade-and-sustainable-development chapters, which could house climate-change provisions in the future.”

If targets for reduced carbon dioxide emissions could be met by replacing baseload power stations with nuclear power, the cost increases for most countries would be relatively small. For countries like Australia, where coal is cheap and massively abundant, a premium on existing prices of perhaps 30-40 per cent would be expected. Many European countries would face no cost increases since nuclear is already the cheapest option.

However, several of these countries have already gone a good way to a nuclear power based electricity industry. And this illustrates the difficulties in making the required level of cuts. Even France with over 70 per cent nuclear emits 6 tonnes per capita. France is therefore way above the magical 2.5 tonnes of CO2 per capita and has already used up its scope to make the cuts by substituting out of carboniferous fuels.

And France, like many other European economies has outsourced many of its energy intensive industries like smelting to areas like Eastern Europe and the Gulf where energy is cheap but greenhouse emissions are no less than if the production was left at home.

Chart 3 Emissions and GDP per Capita 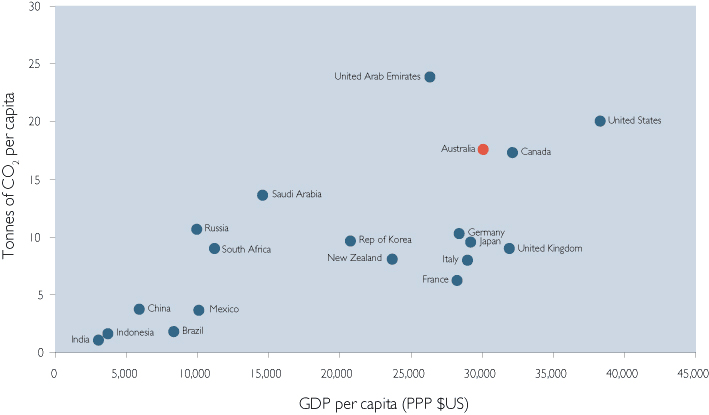 The impossibility of meeting emission reductions by replacing coal with nuclear, in itself the least fearsome solution, is illustrated by the relative shares of electricity and gas in the emission profile.

All OECD countries are a bit different but the magnitudes are similar. For Australia, electricity is only 35 per cent of emissions and this starts to define the maximum that can be achieved by making the use of coal prohibitively expensive. 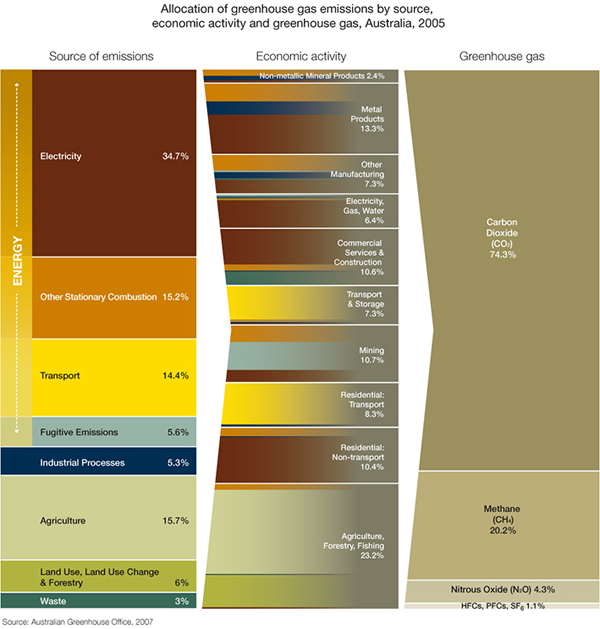 The report to the former Australian government examined the switch to emission levels at 80 per cent of 1990 levels by 20202. This estimated the CO2 equivalent trajectories were as follows. 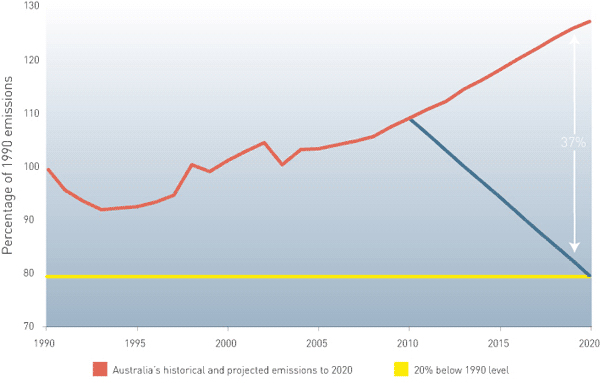 It argued, “To illustrate the magnitude involved, this is equivalent to, for example, replacing Australia’s entire existing fossil fuel–fired electricity generation capacity with electricity from nuclear energy while at the same time removing all existing vehicles from our roads.”

Moreover, these measures are not taking place in a vacuum. A great many greenhouse mitigating regulatory programs are in place even in those Kyoto recalcitrants which used to comprise Australia as well as the US. For Australia

These existing measures are the equivalent of a tax on stationary sources of electricity of about $10 per tonne, or 30 per cent of the ex-generator cost.

A carbon tax or auction of permits would come in over and above this. Early work on the level of such a tax that would be required put the level on $10. That is a distant dream. Stern put the number at US$100 but also had a lot of persuasion and education to assist – calling upon what the economist Lionel Robbins famously referred to as “that very scarce commodity, human love”. And by bending the rules of finance and allocating very low discount rates to the net present value estimates of costs, he managed to argue that the costs would be minor and swamped by the benefits.

Energy costs have already risen strongly in OECD countries in the light of self-inflicted measures to reduce CO2 emissions. To do the task that is sought by those promoting the notion that catastrophic human induced global warming will take place in the absence of rigorous control measures will result in massive industrial disruption and loss of income as investment is diverted to energy resources that offer poor productivity and as industries and consumers reduce and restructure their demand.

The emission reductions required are much greater than the previously horrific calls like 20 per cent below 1990. For OECD countries, we are talking about emission levels of a quarter and less of current levels. Moreover, none of this will do very much for emission controls if Developing Countries are not also forced into making emission reductions or holding them at current levels. In the absence of this we would see emissions of developed countries being largely transferred to developing countries and the emission intensive goods being imported.

To combat this requires a comprehensive new form of currency in the form of carbon ratings. All goods would need to be rated and their producers would be required to demonstrate the required credits. In the case of imports that did not meet these stipulations, the importer would be required to meet the deficit. Pretty soon we would see a world trading economy unrecognisable from that we now have

2 Report of the Task Group on Emissions Trading